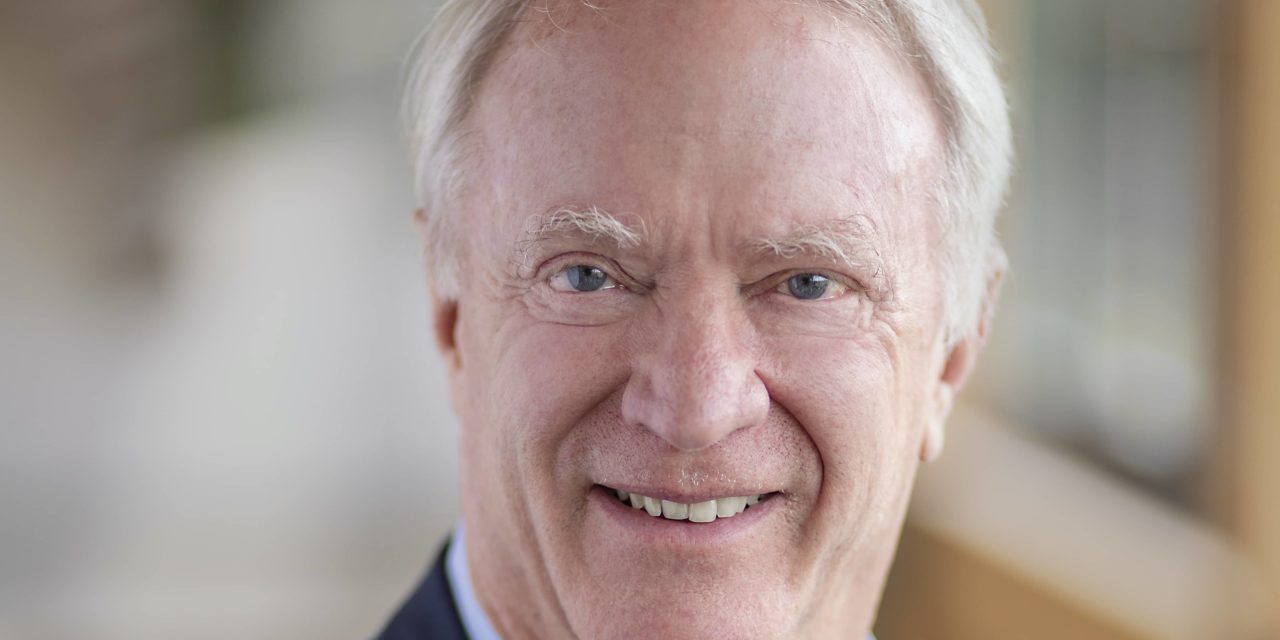 In August, Fitchburg-based Usona Institute started construction on a campus that it hopes will become a global center for research on psilocybin and other consciousness-expanding medicines.

Executive Director Bill Linton, CEO of life sciences company Promega, co-founded the institute in 2014 as part of an effort to seek federal approval for therapies then studied at around a half dozen universities.

He became involved after a neighbor received psilocybin through a Johns Hopkins University study designed for cancer patients with depressive disorders.

The day and a half of therapy “really changed, in a very fundamental way, her outlook on life,” Linton said.

“She greeted each day with a sense of gratitude, a sense of being alive, even though she knew that she had a limited amount of time on the planet,” he said in an interview. “The big ripple impact was on her family and friends and her children, her grandchildren.”

Linton said he was curious about how a single therapy could make such an impact. He began talking with researcher centers, which led him to work with the University of Wisconsin-Madison School of Pharmacy on a pharmacokinetic study that looked at how the drug was metabolized in the body. That led to the creation of Usona.

The new campus, set to open in 2023, is needed as the institute grows.

“As we were bringing more people on staff, we saw a need for these people to have a home,” Linton said.

The campus will support research, education and the study of indigenous practices that have used the medicines for thousands of years. It’ll offer “experiential immersion” that takes into account people’s sensory experiences during the therapy, Linton said.

Linton sees the center as a “node” in a wider network of research centers, academic studies and clinical trials.

He spoke with Wisconsin Health News recently about Usona and its work. Edited excerpts are below.

WHN: What will the campus involve?

BL: We began construction in August of this year. We’ve done about two years of pretty extensive design. Part of the challenge that we had was that there really has not been a facility developed kind of from the ground up for this purpose really anywhere in the world. We couldn’t go to another site and take a look at what they had designed and what they had built and extract from that some of the best practices. That’s really part of the challenge, and why it took more than two years to come up with design.

We expect that this will be complete in the summer of 2023. So we have about 20 months remaining on the project. We have 17 acres in a forested area just to the north of and adjacent to the Promega campus, so we’re very fortunate to have that land available to us for this site. We’re also going to be doing a lot of extensive landscape development, really connecting with nature. Because we find that after these therapeutic treatments, there really is a deeper sense of connection with nature, connection with self, connection with others. We’ll have two on-site residential cottages. These will be for patients and visitors as well. So that will be part of a campus that we’re developing.

We’ll be doing management and oversight of clinical research and the trials involving these, we call them, consciousness-changing or expansion therapies. We’ll include approved drugs in the future as they become approved, with psychedelics being the major class that we’re focused on. We’ve been doing what we call therapy guide development really for the last four years and so we expect that there will be people coming in to learn how to do appropriate guiding or facilitation as people are going through these transformational experiences. And then we’ve also developed a curriculum that we’ve made available and actually published it out so that other centers can use this curriculum.

The campus is going to be fairly unique in the sense that we want to provide experiential immersion. I kind of like that term because it really takes into account light, sound, body work. There’s a hydrotherapy component that includes a floating pool, saunas, steam room and so forth. So the idea is to get people through all of the senses that come into a person in this process of changing awareness, changing consciousness, and where, in the future, when these drugs are approved, that becomes just another element in terms of this sense of transformation.

We really see this campus not as being a remote, isolated retreat center by any means. We really want this to be a node in a network of research centers, academic studies, clinical trials. Our focus is really on collaboration. So this term collaboration is really a key for how we see this operating in the future with people coming in, having these experiences, training, education, learning and then going back out. And from what they’ve learned, from their visits, they can then go back to communities and begin practicing and just be simply better at what they do.

WHN: What are the current studies being pursued by Usona?

BL: We’re about two-thirds of the way through a phase two. Now phase two looks at the safety, as does phase one, but it also includes efficacy. Our target indication in this phase two, which was really provided by the conversation we had with the (Food and Drug Administration) in 2017, is on major depressive disorder. That is something that is very hard to treat. We’re about two-thirds of the way through that study, ultimately enrolling 100 patients. We think that will be completed around the first quarter of 2022. And then targeting to begin a phase three by the third quarter of 2022 and hopefully approval by early 2024. It takes about a year and a half to go from the beginning of a phase three to eventually getting approval, depending on how quickly FDA responds and how quickly we can enroll the number of people we need for phase three. The outcome of phase two will inform us as to the number of people we need for a phase three.

I would also mention that we were granted a couple of years ago break-through therapy status. It’s a designation the FDA gives when they see the potential of a treatment as having a significant impact on a disease state that is considered serious and pervasive. And they certainly see major depressive disorder as being a pervasive problem in the United States and they saw the early indications that psilocybin could have a major impact in a positive way on that population.

WHN: Usona has adopted an “open science” approach to this research. How come?

BL: It was really in recognition of the long history of work in psychedelics, really going back to the 1950s, where LSD and other psychedelics, but principally LSD, were used in the treatment of alcoholism and also cancer patients. So the work really goes back about 60 years. The people at that time, the researchers, published quickly what they found. They wanted to bring this to the public because they saw the huge potential that it had, as opposed to keeping it secret or trying to patent around the work. This open science concept is really honoring the researchers of the past and the fact that we’ve really built our practices today – in fact, everybody who is involved in this work is really building on the last 60 years of ideas and discoveries that have been made and published. It’s really sort of recognizing the value of that work.

About a year ago we began to look at, ‘How can we ensure that bad patents are not issued?’ What that means is that because a lot of the work is not readily available, even a lot of the published work is not readily available to patent examiners, we want to make much of that information available so that they have access to all of that information. So we created a website that we call Porta Sophia. It’s open. It’s available to anyone. But it’s particularly targeted toward patent examiners, so they can go in and search with very well developed search algorithms literally thousands of publications that otherwise they may not be able to access. We’re trying to prevent bad claims from being issued simply because examiners don’t have access to the information. But we also support issuance of good patents, which are based on true innovation and where there’s no prior art.

WHN: How big of a concern are bad patents?

BL: Specifically in the area of psilocybin, we don’t see any problems. We’re aware of the patents that have been issued. We are aware of the fact that the examiners didn’t have access to important information. We’re supporting the development of information that would make it readily apparent that even if a bad claim has been issued, it’s unlikely to be enforced by the patent holder simply because science, in the end, is going to determine whether or not the work has already been described in the past … We’re not at all concerned that we or others who want to produce and make available psilocybin will be prevented from doing that.

WHN: Is Usona looking at other drugs beyond psilocybin?

BL: We have a second drug under development. We call it 5-MeO. That stands for 5-methoxy-N, N-dimethyltryptamine, so 5-MeO or 5-MeO-DMT. We began safety studies on that in the last year and a half. We’re completing those and expect to start a first-in-human safety trial that will be in healthy adults in the first quarter of next year. We expect that that’s probably going to be done here in Madison.

WHN: What do you see as the potential for psychedelics?

BL: We do provide psilocybin and other molecules, including 5-MeO, to over 140 other research centers. And we do this in a way that is extremely cost effective for them and provides high quality materials that can be used in human studies. What we’re really seeing is a pretty broad range of indications. We’re focused on major depressive disorder. But others are looking at things like demoralization, end-of-life distress, (post traumatic stress disorder), other related mental illnesses. We know that there is a study that we think is going to start in the next six months with bipolar disorder. Eating disorders are another area being targeted by some centers, addiction, substance abuse, alcohol, nicotine, opioid addiction. Opioid addiction is being looked at by the University of Wisconsin here. Nicotine at Johns Hopkins, alcohol abuse at New York University. We’re seeing a lot of focus on whether or not these can be helpful in resolving addiction. Chronic pain is another area that’s being looked at.

So there’s a lot of work to do to see which one of these will be helped by psilocybin or 5-MeO-DMT, any of these psychedelics. But there seems to be enough early evidence of efficacy that these centers are pursuing these different indications.