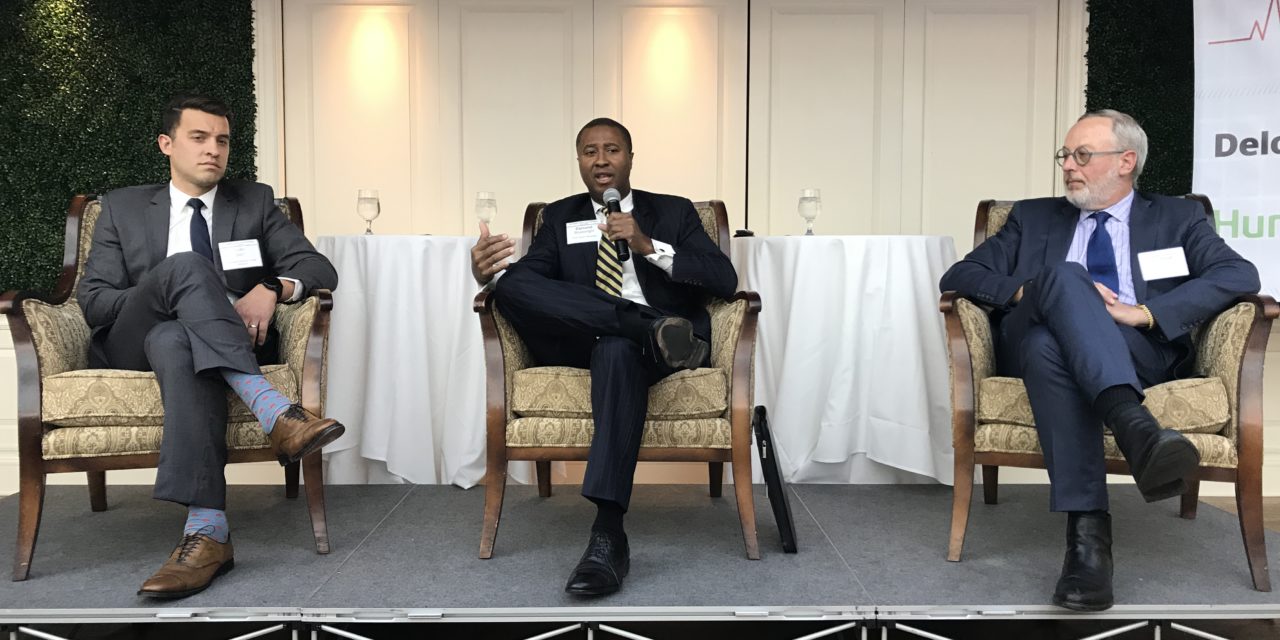 Hospital leaders weighed in on what health systems can do to cut costs and the role they should play in addressing the social determinants of health at a Wisconsin Health News panel this week.

Watch a WisconsinEye video of the event.

WHN: How are you navigating regulatory uncertainty?

Damond Boatwright: I think to what Shakespeare wrote, which is, “Above all else, to thine own self be true.” And you really can’t control every single thing that potentially could happen externally with the regulatory environment and the uncertainty that’s going on in Washington and etc. in other places. But you can control what goes on within your four walls, right?…

I think it’s very important for people like me in particular who run healthcare systems not to be lulled into a false sense of complacency when we can just call somebody on the floor and say, ‘I need to get in tomorrow to get seen for primary care.’ But we’ve really got to look at it through the lens of those who may not have access, may not have privilege or a title and say, ‘How long does it take them to get in to see a primary care doctor? How long are they waiting on the phone to pay their bill? Do they even understand the bill itself? How much are they paying out of cost?’

I think that as sort of a leader of a healthcare system, we need to focus on making it friction-less for those that consume our product. And even though we can come up with many reasons why we can explain, and they’re all pretty much legitimate, why care costs as much as it does, it almost matters less to the person who has to pay it out of pocket who then are making a decision on, ‘Do I pay for this healthcare services versus other discretionary costs that may be just as important to me?’ For us, it’s really understanding that continuum of care, how one experiences healthcare in the community and how do we make that enhanced and better for them at the end so that they’re healthier and well and contributing to their society and being better citizens in their community and then focusing on the total cost of care, which is even more important than the price of care, the total cost of care, because that’s really what we’re spending.

WHN: What do you think is the single most important thing that can be done to address healthcare costs?

Dr. Scott Rathgaber: There still is a lot of waste in what we do. I agree with what Damond was saying about that we need to focus on what we can do. And the one thing that I know about the government is that whatever plan they come with there’s going to not be more money, right? So anything we can do to bring down our costs is going to be a benefit, no matter what program gets developed or approved.

If you’re looking for one thing, I think we can work on our waste. And it’s not just dollar waste or supply waste. It’s waste of time. It’s waste of convenience. It’s a lot of those sorts of things as well…our best options there are probably in standardizing some of our care and thinking about those patients who aren’t me – because I can get an appointment tomorrow, I know who to call – how do we get navigators for them so they use our system in the most efficient way?

Damond Boatwright: The Kaiser Family Foundation who’s researched and studied this, as well as the Pew foundation, as well as Rand, all looked at what drives healthcare costs. And 20 percent of what we do – 15 to 20 percent – is healthcare delivery. We do a great job of rescuing care in the moment when we need to. But that’s after the fact. Forty-five percent that determines one’s health condition are the things that we don’t like talking about, which is diet and exercise. But also where people live. And the social determinants that drive those conditions – literacy, unemployment, air quality, homelessness. It’s not just my opinion. A number of different foundations that looked at it would suggest that.

But where is 95 percent of the money spent and invested? It’s in the 20 percent…we have to get out of the four walls of our hospitals, our clinics, our nursing homes, have really honest, meaningful and sincere conversations with our communities themselves and then really look at those drivers, those real drivers that create the conditions in which people then get diseases. And if we can sort of stop it there, which a lot of other countries do, then we can be more successful.

Luke Beirl: We as a country are literally eating ourselves to death. I mean like literally. I mean I think I read in the Times the other day that for the first time ever, the military in this country is struggling with obesity with cadets. So until we recognize that what we consider normal as nutrition in this country, it’s going to be really hard to correct some of those downstream effects that 20 to 30 years of poor diet will do.

What we can do specifically today, I think the social determinants of health conversation is a really important one to be having in the communities. I also think it’s really important that we as healthcare providers understand that it’s our position at this point to augment what we do in the community because we have not structured healthcare to solve some of the public health crises. And I would argue that we’re probably not the best ones to potentially address those issues. We’re probably the best partner in figuring out what that solution is. But we have to be very careful. Because the last thing we want to do is play in an area where we get ourselves into a level where we’re not quite competent to be dealing with some of those issues.

But within the four walls of our facilities, I have to agree wholeheartedly with the operational components and standard work. We like to think we’re all unique in healthcare. And when it comes to care, we certainly are. But when it comes to things like registration processes, when it comes to things like billing, when it comes to some of the non-value added activities, it creates a lot of waste in our healthcare system … It’s not going to be reducing the $200,000 visit that what percent of the population incurs. It’s the $100 here, the $1,000, the $1,500 there. That’s what we could potentially identify and through an incremental approach help reduce costs in a somewhat methodical way.

WHN: What role should health systems play in addressing the social determinants of health?

Dr. Scott Rathgaber: We decided when we were talking about population health outside our walls – I love hearing the same language – that we were going to put our nickel down basically on homelessness, on the opioid addiction problem and with adverse childhood experiences, thinking that those are big issues that we needed help on.

So we went out and we helped to be a convener or to put together a collaborative in La Crosse of – it had to be 40 different agencies working on homeless, interestingly enough. And our local sisters were kind of the lead of that. We worked with the other health systems in town, Mayo Clinic, to work together on this important piece. And we proved that if you coordinate all the work that’s being done – it’s all in silos, nobody talks to each other – we actually could make a big difference in homelessness in our town. We started small with veterans and solved that problem. They had a little more resources frankly, when you’re talking about what are the barriers. Then we moved on to the chronically homeless. And then the bigger piece was families who are homeless because they don’t actually qualify as homeless. We still thought it was important piece. We ended up housing 400 different individuals by working in the community, not only with our social services, but with law enforcement, with the landlords, which was actually a really important piece, having a place for these folks to go. And when we put all of this together, we were very successful. And now we’re working on moving upstream. It would be great if we prevented people from becoming homeless. So we have rent support and things like that. Because it’s a tiny difference sometimes before they fall into the problem of homelessness. And if we can prevent it, we’re much better. So we’re getting even better at tracking who needs the help in moving upstream.

That was a smaller collaborative, a proof of concept of working in the community and coordinating. Now we’ve worked on the opioid addiction problem in our community, which we all have. We have a lot more partners, a lot more agencies. And we’re making a difference in overdoses in our community already. We’re trying to put prevention, but also with treatment and recovery, you know have that whole continuum working throughout the community. We’re making progress on that.

Then the last piece is the adverse childhood experience, which is really a long generational play because this feeds into mental health 20 years from now and physical health beyond that, how those are being put together. So we’re trying to work on becoming a trauma-informed community, so everybody understands how that affects the health of our population and then moving on to what we can do to build resiliency in those populations. So we’re getting outside the walls.